International perspectives and comparisons add value to the work. Since the late eighties Dijkstra started to attend ISPCAN conferences and in the the nineties and after the millenium she made several work visits in Europe and to Canada and the United States. She was a member of the network on gender, conflict and violence and later a member of CAHRV, Coordination Action Human Rights Violation. She participates in WAVE and the European Network on Gender and Violence (ENGV).

She presented at national and international conferences on Domestic Violence, Children who witness abuse, at Eurocrim, International Social Work Conferences in Europe, PATNET, recetly at the ENGV and the American Philosophical Association and she was a guest speaker at UBC on trauma and giving meaning to child hood abuse.

In April 2015 she contributed in a workshop together with Harry Kunneman to a symposium on the work of Jessica Benjamin on Recognition, Repair and the Moral Third

She cooperates some years with dr Sue Elmer, Trinitiy college, University of Leeds, dr. Lorraine Green, University of Nottingham, professor Marianne Hester, University of Bristol   and with Jona Olaffsdottir from the University of Island. Since 2012 she is connected with the Polanyi Society, due to the research on Hidden Treasures, tacit knowledge of professionals and those concerned.

She is also connected to the work of professor Jeffrey Edleson and Taryn Lindhorst, for instance on the work on child abduction and partner violence.

Together with partners from Malta, England, Sweden and Kroatia she send in a Daphne proposal on Caring Dads, which was accepted, but, unfortunate, not sufficient supply to run the programme and do the evaluation.

She was the project leader of the four years funded project on the Flag System RY, a method and tool to talk about (non)consentual sex applied to youngsters and professionals in residential youth care.

Right now she is preparing with University of applied sciences Windesheim in a consortium (VJ-Institute, National Institute on Youth Care, professionals/mediators, visiting houses, youth care, parent support)  an aplication for a four years project on Complex Divorce with a focus on discovering and analysing different patterns of high conflict divorce, developing de-escalation and finding out more truly interdisciplinairy cooperation in which seven dimensions of complex divorce are viewed at: in order to develop a meta-language and repertoire 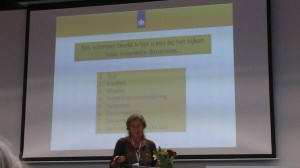